**********
So, the Hudson is no more? Too bad. I was getting used to that car.  Looks like graduation is imminent. But alas, we won't know what it was like because this is the last entry for the year 1921. Stanford simply stops writing in his diary after this date. Therefore, this diary and blog now comes to an end.

Fortunately for us, he resumes in January 1922, a very important year in the life of Stanford Closson and all those who are descended from him because that is the year he meets his wife! So please join me at the next blog, Datebook 1922, on January 1st.

At the end of the diary there are a couple of lists: one entitled "Commencement Programs," and another entitled "Announcements."  They are below.  Note that someone (probably Ann) has put an asterisk next to Hazel's name in both lists. Hazel's inclusion here is the first indication in the diaries that Stanford was even aware of her existence. It makes you wonder who he thought would be reading his diaries that he would completely refrain from mentioning her. Did she attend the graduation, do you think?

The lists read like a Who's Who of Closson friends and family. I think I recognize most of the names from having come across them in his diaries over the years (especially noteworthy are Sawyer and Benedict). There are a few, though, that I'm curious about. See if you can find out who they are. Or maybe we'll see them again, next year.  Until then, have a happy holiday! 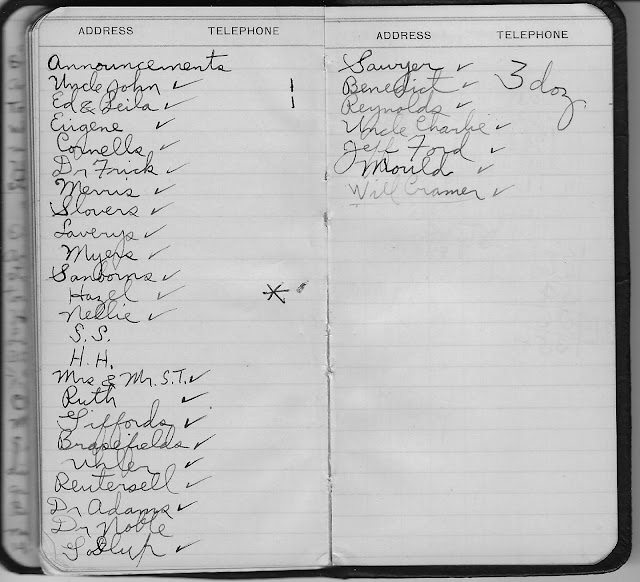 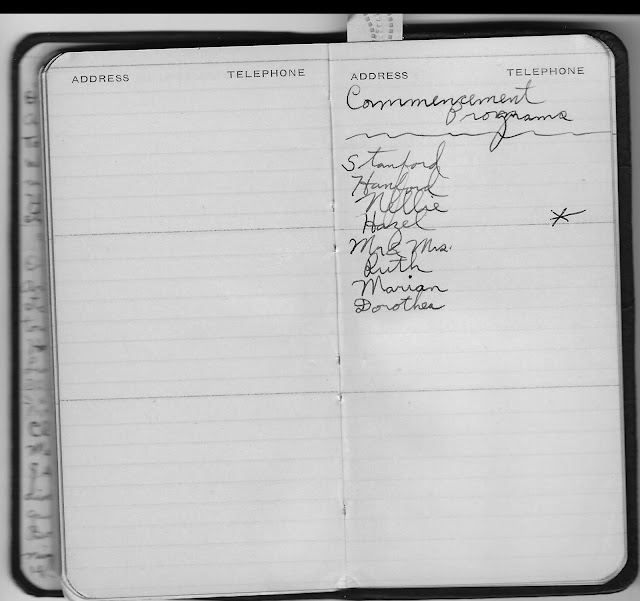 Posted by Cheryl at 7:28 PM No comments:

There are no entries for these days and no explanations for why they are blank.

Posted by Cheryl at 6:55 PM No comments:

**********
Wonder what he does downtown? He doesn't detail his activities there anymore. Alas!
Posted by Cheryl at 6:54 PM No comments:

**********
I guess there were no Mothers Day festivities in their house. But Stanford did seem to appreciate his mom, at least. No way to know who Mr. Antrim is.

Posted by Cheryl at 6:51 PM No comments:

**********
I guess he went to a tennis match that Union apparently won? According to the 1921 Garnet, the tennis team won all their matches in 1919. That helps, since their other teams are not that good.
Posted by Cheryl at 6:40 PM No comments:

**********
Ah, the Junior Prom! Now I know the reason for the dancing lessons and the fancy suit, complete! And he's apparently still dating Miss Reynolds. 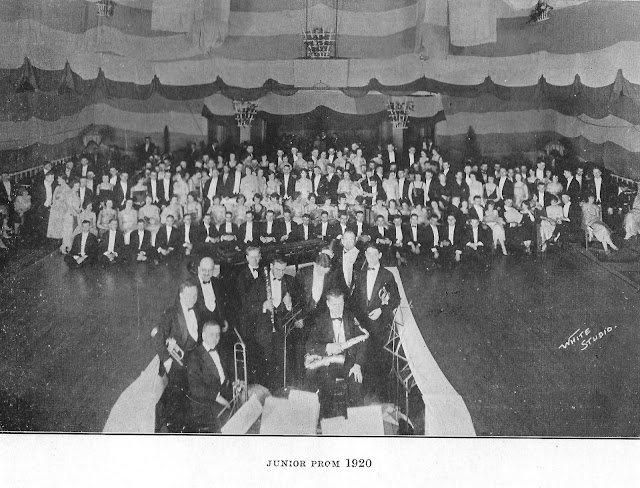 Posted by Cheryl at 6:30 PM No comments: 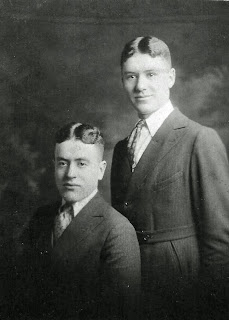 I've created this blog to make a record of the hand-written journals of Stanford Stillman Closson (1900-1982), who was in his life a Methodist Minister, grandfather, father, brother, husband, son and friend. This is the third installment of Date Book, covering 1921 (the first two cover 1919 and 1920). For as long as seems practical, I will record subsequent years (they continue into the 1970s). I'm matching the days--January 1, 1921 to January 1, 2015, for instance--with one entry per day.
The daily entries are pretty short, though, so in addition to recording the diaries, I'm also annotating them, giving additional information about the people, places and events mentioned by Stanford. By doing this, I hope to convey a sense of 1921 Schenectady, New York and the people Stanford interacted with. Of course, I'm also hoping to give Stanford's descendants a fuller picture of who he was as a young man.